The Artillery of Gettysburg 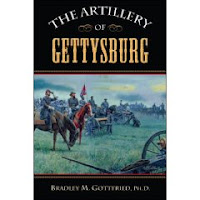 From the publisher:
The battle of Gettysburg in July 1863 marked the turning point of the American Civil War. The apex of the Confederacy's final major invasion of the North, the devastating defeat also marked the end of the South's offensive strategy against the North. From this battle until the end of the war, the Confederate armies largely remained defensive. The Artillery of Gettsyburg is a thoughtful look at the role of the artillery during the July 1-3, 1863 conflict.

By the time of the Gettysburg campaign, artillery had gained respect in both armies. Used defensively, it could break up attacking formations and change the outcomes of battle. On the offense, it could soften up enemy positions prior to attack. And even if the results were not immediately obvious, the psychological effects to strong artillery support could bolster the infantry and discourage the enemy. Ultimately, infantry and artillery branches became codependent, for the artillery needed infantry support lest it be decimated by enemy infantry or captured.

The Confederate Army of Northern Virginia had modified its codependent command system in February 1863. Prior to that, batteries were allocated to brigades, but now they were assigned to each infantry division, thus decentralizing its command structure and making it more difficult for Gen. Robert E. Lee and his artillery chief, Brig. Gen. William Pendleton, to control their deployment on the battlefield.

The Union Army of the Potomac had superior artillery capabilities in numerous ways. At Gettysburg, the Federal artillery had 372 cannons and the Confederates 283. To make matters worse, the Confederate artillery frequently was hindered by the quality of the fuses, which caused the shells to explode too early, too late, or not at all. When combined with a command structure that gave Union Brig. Gen. Henry Hunt more direct control than this Southern counterpart over his forces, the Federal army enjoyed a decided advantage in the countryside around Gettysburg.

Bradley M. Gottfried provides insight into how the two armies employed their artillery, how the different kinds of weapons functioned in battle, and the strategies for using each of them. He shows how artillery affected the ebb and flow of battle for both armies and thus provides a unique way of understanding the strategies of the Federal and Union commanders.