The Civil War in Loudoun County, Virginia: A History of Hard Times 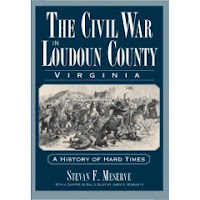 From the publisher:
In this look at Loudoun County's role in the Civil War, historian Stevan Meserve narrates not only the large-scale fighting at Ball's Bluff in 1861 and in the Loudoun Valley cavalry battles of 1863, but also the lives of the citizens who sacrificed their crops and livestock, cared for the wounded and buried the dead of storied regiments such as White's Comanches, Cole's Potomac Home Brigade, Mosby's Rangers and the Independent Loudoun Rangers. Drawing upon military accounts and other historical documents, The Civil War in Loudoun County celebrates their eventual triumph and the vibrant communities that exist today.

From CWBN:
Barnes& Noble shows the release date for this title as today; Amazon shows it as March 14.