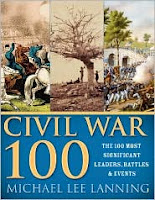 From the publisher:
The Civil War was the defining event in American history.
The Civil War 100 uses a truly novel approach to analyze the respective importance of the events, leaders and battles of America's most important war.

"Across this easily accessible reference, readers meet not only such icons as Lincoln and Lee, but also chronic fumblers whose tarnished reputations have most often sunk beneath the notice of the endless waves of Civil War histories. A recommended reference for the aficionado and the uninitiated alike. Those well-versed in Civil War lore will enjoy the intellectual challenge of supporting or debunking Lanning's rankings, while the merely curious will be exposed to an insightful world of detail that they may have otherwise missed." -ForeWord Magazine

Michael Lee Lanning retired from the U.S. Army after more than twenty years of service. He is a decorated veteran of the Vietnam War, where he served as an infantry platoon leader and company commander. Lanning has written fourteen books on military history, including The Battle 100. He lives in Phoenix, Arizona.

From CWBN:
The exact day of release for this February title is unknown.