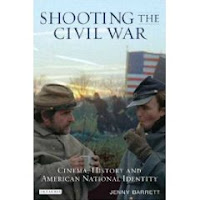 From the publisher:
No fewer than seven hundred Civil War films have been made by Hollywood from early silent days to the present, from the epoch-making Birth of a Nation, through The Red Badge of Courage and Gone With the Wind to the recent Glory, Ride with the Devil and Cold Mountain.

This readable and innovative book on the American Civil War as presented in Hollywood cinema goes deep into the best of these films, arguing that rather than belonging to a single genre, Civil War films are to be found across genres, as domestic melodramas, Westerns or combat films for example. As such, they have fresh insights to give into the war and into America's sense of itself.

Shooting the Civil War shows how these films create an American ancestor who is blameless and undertakes a process of reinscription into the American historical family. It also makes the remarkable revelation that no Civil War film yet made has had a central black character who survives the war, fathers the children of the future, and can stand as representative of the whole American people. To this extent, the book is saying, the Civil War remains a work in progress.