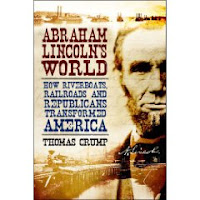 From the publisher:
Abraham Lincoln's World describes not only important new developments during Lincoln's life-time, but also relates them -- and other key events-- to the appropriate historical and geographical context. There are chapters devoted to Missouri, California, Kansas, Texas and the deep south, and to Illinois, Lincoln's own home-state. The book's final chapter focuses on Lincoln's four years (1861-65) in the White House, but it also describes how Lincoln won both the presidential race and the war that then followed, almost inevitably, as a result of this victory.

Thomas Crump also examines how the United States was transformed - politically, economically, geographically and socially - during Lincoln's life and how more than anyone else, he adapted to these changes and gave them a new direction. Crump's portrait of Lincoln's America shows how institutions, places and people changed during Lincoln's lifetime and how by the time of his death the country was on the verge of a great breakthrough. Written with clarity and insight this is an engaging account of the true beginnings of the modern United States.

Thomas Crump published his first book in 1963 and has written books on law, science, anthropology and history. As an academic he worked mainly in the United States at many universities including Harvard, Princeton, Yale and Georgetown.