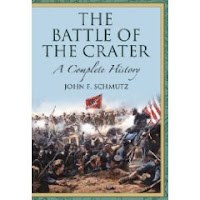 From the publisher:
The Battle of the Crater is one of the lesser known yet most interesting battles of the Civil War. This book, detailing the onset of brutal trench warfare at Petersburg, Virginia, digs deeply into the military and political background of the battle.

Beginning by tracing the rival armies through the bitter conflicts of the Overland Campaign and culminating with the siege of Petersburg and the battle intended to lift that siege, this book offers a candid look at the perception of the campaign by both sides.