Ultimate Sacrifice at the Battle of Kernstown: William Gray Murray, First Pennsylvania Colonel to Die in the American Civil War 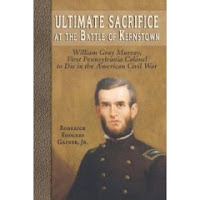 From reviewers:
[Ultimate Sacrifice at Kernstown] Vividly details not only the military actions on the battlefield, but offers readers an insightful look into the life of the Irish Colonel, including an excellent rendering of his experience in the War with Mexico and his personal life as well.Opens the door for the reader to catch a glimpse of the behind the scenes struggles of training and disciplining a raw Civil War regiment, as experienced by both officers and enlisted men. Gainer has expanded our knowledge of the lives and motivations of the men who fought at Kernstown. -- Scott C. Patchan, Board of Directors, Kernstown Battlefield Association

A revealing portrait of a patriot and long forgotten war-hero. At last, Colonel Murray has received the attention he so richly deserves. Mr. Gainer is to be commended for his effort, which is factually correct and well written. Recommended. --David L. Richards, Licensed Battlefield Guide, Gettysburg National Military Park, Historian, Eighty-fourth Pennsylvania Volunteer Infantry