Two Brothers - One North, One South 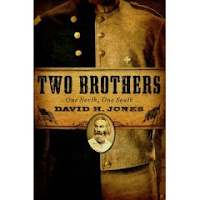 From the publisher:
Walt Whitman feared that the real war would never get in the books: the true stories that depicted the courage and humanity of soldiers who fought, bled, and died in the American Civil War.

Exceptionally researched and keenly accurate to actual events, along with the personages that forged them, David H. Jones's novel spans four years in the midst of America s costliest and most commemorated war. The journey is navigated by the poet, Walt Whitman, whose documented compassion for the wounded and dying soldiers of the war takes him to Armory Square Hospital in Washington, D.C., and finds him at the bedside of William Prentiss, a Rebel soldier, just after fighting has ended.

As fate has it, William's brother, Clifton, a Union officer, is being treated in another ward of the same hospital, and Whitman becomes the sole link not just between the two, but with the rest of their family as well. The reader is taken seamlessly from Medfield Academy in Baltimore, where the Prentiss family makes its home, to the many battlefields where North and South collide, and even through the drawing rooms of wartime Richmond, where Hetty, Jenny, and Constance Cary are the reigning belles.

The author, David H. Jones, born and raised in West Virginia, has been a lifelong student of the Civil War. His research took him into the swamps of Dinwiddie County, Virginia, to rediscover the lost location where a pivotal event in the book took place. A graduate of Kentucky Military Institute and Babson College, former Navy officer, and entrepreneur, he currently lives and writes in Los Angeles, California.

From CWBN:
We missed the true release date for this title, February 1.