Two Boys in the Civil War: Confederate Brothers During and After the War Between the States 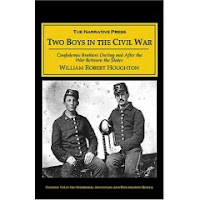 From the publisher:
Two Boys in the Civil War recounts the war stories of William, an eighteen-year-old schoolteacher at Smith's Station, Alabama, and his brother Mitchell, a sixteen-year-old assistant newspaper editor in Newton, Alabama.

William enlisted in 1861 and was wounded seven times in battle. Mitchell, who also enlisted in 1861, was twice wounded, captured at Lookout Mountain, and imprisoned for sixteen months at Camp Morton, Indiana, where he nearly died from starvation and exposure.