Into the Valley: A History and Tour Guide of Civil War in the Shennandoah Valley, 1861-1865 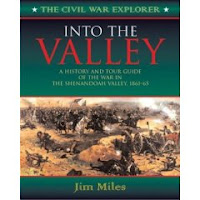 From the publisher:
The Shenandoah Valley - the mere name sounds enchanting, and its beauty and bounty have captivated the imagination of Americans for 300 years. During the four years of the Civil War, what was once an amazing geological attraction became a vital strategic asset. Possession of the Valley by the Confederacy meant an invasion route into the heart of Maryland and Pennsylvania and to the backdoor of Washington, D.C. In Union hands, the Confederacy would lose a valuable railroad, the agricultural produce of the Valley, and protection from attack via the many gaps through the mountains of Virginia.

Great generals, including Stonewall Jackson, Philip H. Sheridan, John C. Breckinridge, George A. Custer, and Jubal Early, fought desperate battles to control the Shenandoah. Armies marched rapidly and maneuvered brilliantly between green mountains and along the sparkling waters of the Shenandoah River, called Daughter of the Stars by Native Americans. The area was devastated by total war-hundreds of farms and tons of food were wantonly torched.

Into the Valley is the first book to offer a comprehensive history of every campaign that occurred in the Valley during four years of combat. The tour guides explore every battle, road, and mountain gap used by the armies and examines the charming, historic attractions of the Shenandoah, its towns and villages, mansions and mills, churches and cemeteries, monuments and museums.

The book contains hundreds of period photographs and drawings. It also is filled with modern photographs that richly illustrate the driving tours, original battle maps, fascinating sidebar articles, a chronology of key events, sources for additional travel information, a bibliography, and an index.

JIM MILES is a seasoned battlefield explorer, author, historian, and teacher who has written more than one hundred articles and several books on Southern history, archaeology, and the Civil War. The author of the best-selling Weird Georgia, Miles lives in Warner Robbins, Georgia.