Army Life: From a Soldier’s Journal 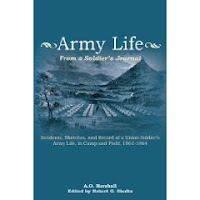 From the publisher:
In 1884, when Albert O. Marshall published Army Life, a memoir of his service as a private in the Thirty-Third Illinois Regiment, twenty years had passed since his 1864 discharge. Marshall left the journal untouched at publication, and today it is a journal that is rare in what it is not. This memoir is not a complete story of the Thirty-Third (known as the “Normal Regiment” because many of its soldiers were from Illinois State Normal University), nor is it a complete roster of regiment members, nor a list of killed and wounded.

Army Life is not, even, a purely military account written from an officer’s point of view. It is the story of a twenty-year-old private whose engaging writing belies his age but also allows his youth to shine through. Marshall tells of the battles he fought and the games he played, of his friends, fellow soldiers, and officers, and of the regiment’s activities in Missouri and Arkansas, at Vicksburg, and in Louisiana and on the Texas Gulf Coast. Enhanced with careful editing and thorough annotations, this journal Marshall carried faithfully to every mustering out is a rich and important Civil War memoir.

Albert O. Marshall was born in 1840 on a farm in Illinois. He served in the Thirty-Third Illinois Regiment for three years, after which he became a lawyer and was elected to a four-year term in the state senate and later to the county court as a circuit court judge.