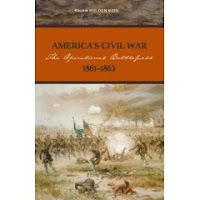 From the publisher:
In 1861, when the Confederate States of America seceded from the Union and Civil War broke out between the North and the South, few people had much idea of the scale, intensity, and duration of the conflict they were about to enter. Politicians, generals, and common folk on both sides blithely assumed that the conflict would be over quickly and were naively convinced of the superiority of the leadership and the forces at their disposal. Three years later, after many horrendous battles and huge loss of life, the tragic realities of this war had begun to sink in. Stalemate had led to great frustration and suggested a protracted conflict with no end in sight.
In this successor volume to his acclaimed Origins of the American Civil War (1996), Civil War historian Brian Holden Reid examines in depth the operational military history during the first three years of America's Civil War. In particular, he focuses on generalship, command decisions, strategy, and tactics, as well as the experiences of ordinary soldiers.

Besides lack of experience among generals, Holden Reid reveals that for the first few years of the war there was considerable indecisiveness in the North, a hesitancy to punish the South, and a fruitless hope that the Confederacy would agree to some form of reconciliation. He highlights certain important political and social developments during the course of the war that had an effect on Union soldiers and shows how their views became a catalyst in hardening the attitudes in the North toward the South.

This important analysis makes a major contribution to Civil War military history within the larger context of a turbulent political and social climate. It will be followed by another work covering the final eighteen months of the conflict.

Brian Holden Reid (London, England) is professor of American history and military institutions and head of the Department of War Studies at King's College, London. Since 1993, he has been a member of the Council of the Society for Army Historical Research and from 1998 to 2004 served as chairman. In 2004-2005, he was the first non-American to serve as a member of the Lincoln Prize jury panel, which awards the most important literary prize in the field of Civil War history. His many books include The Origins of the American Civil War, The Civil War and the Wars of the Nineteenth Century, and Robert E. Lee: Icon for a Nation.