The Hour of Our Nation's Agony: The Civil War Letters of Lt. William Cowper Nelson of Mississippi 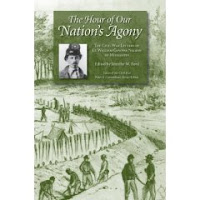 From the publisher:
The Hour of Our Nation's Agony offers a revealing look into the life of a Confederate soldier as he is transformed by the war. Through these literate, perceptive, and illuminating letters, readers can trace Lt. William Cowper Nelson’s evolution from an idealistic young soldier to a battle-hardened veteran.

Nelson joined the army at the age of nineteen, leaving behind a close-knit family in Holly Springs, Mississippi. He served for much of the war in the Third Corps of Robert E. Lee’s Army of Northern Virginia. By the end of the conflict, Nelson had survived many major battles, including Fredericksburg, Chancellorsville, Gettysburg, and the Wilderness, as well as the long siege of Petersburg. In his correspondence, Nelson discusses in detail the soldier’s life, religion in the ranks, his love for and heartbreak at being separated from his family, and Southern identity. Readers will find his reflections on slavery, religion, and the Confederacy particularly revealing.

Seeing and participating in the slaughter of other human beings overpowered Nelson’s romantic idealism. He had long imagined war as a noble struggle of valor, selflessness, and glory. But the sight of wounded men with “blood streaming from their wounds,” dying slow, lonely deaths showed Nelson the true nature of war. Nelson’s letters reveal the conflicting emotions that haunted many soldiers. Despite his bitter hatred of the “ruthless invaders of our beloved South,” the sight of wounded Union prisoners moved him to compassion. Nelson’s ability to write about irreconcilable moments when he felt both kindness and cruelty toward the enemy with introspection, candor, and sensitivity makes The Hour of Our Nation's Agony more than just a collection of missives. Jennifer Ford places Nelson squarely in the middle of the historiographic debate over the degree of disillusionment felt by Civil War soldiers, arguing that Nelson-like many soldiers-was a complex individual who does not fit neatly into one interpretation.

Jennifer W. Ford is head of special collections and associate professor at the J. D. Williams Library at the University of Mississippi, where the where the collection containing Lt. Nelson’s letters and other family documents is held.